Shihan Anthony Ryan’s major passion in Karate has been studying the five major animal styles of the Fujian Province, and showing how they are still relevant

This video is just a snippet of a series of videos which go in-depth into each of these techniques; their footwork, physiology, tactics etc.

Shihan Anthony Ryan’s major passion in Karate has been studying the 5 major animal styles of the Fujian Province (the area that highly influenced the development of karate) and showing how they are still highly relevant to all Karate-ka today.

Humans have always studied and mimicked animals. Not only in Chinese Martial Arts, but almost every tribal culture in history. For example, many cultures would dress up as animals and behave like them the night before a hunt. They would do this to connect to the animal’s physical traits and spirit.

They understood that to understand an animal helps you to conquer it. This applies heavily in combat – to understand the animal you are up against helps you create a strategy to beat it. 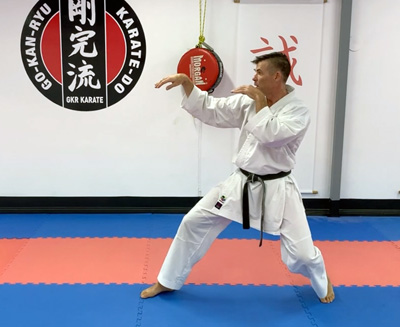 The old tribes-people also appreciated that even the smallest, weakest animals had incredible fighting spirit.

Where humans often froze in fear upon being attacked, sinking into a fetal position, even the smallest of animals would fight tooth and nail to the bitter end. Where a human would focus on their limitations (“I’m too small, I’m too weak”), an animal would focus on the few weapons it had at its disposal that would give it a fighting chance.

Therefore, locking into the spirit of the animal in combat meant they were stepping into a superior mindset.

What is interesting is that, despite their differences, each animal can be successful against another. This essentially gives us 5 different ways to attack, defend etc. We are able to find those techniques and tactics that better suit our body type, level of experience etc. It also gives us more options, making us less predictable in our patterns, but additionally, when one is not working, we can switch to another strategy, technique, physicality that may find success.

Because we all have a level of understanding of animals, we all immediately have a base level understanding of the topic.  For example, if you are choosing a technique from Tiger style, as you have seen tigers in documentaries, you understand that accompanying this technique must be a certain type of physicality and mindset. A low stance, graceful movement, explosive techniques and a certain level of aggression. When we tap into the right mindset and physicality, we are able to increase the chance of making these techniques work.

Finally, it keeps kumite far more enjoyable. Kumite should not be a case of, these are the two or three techniques or tactics you like, and sometimes they work and sometimes they do not. It should be an adventure, with countless ways to perform any technique.

View the full series of videos at onlinedojo.gkrkarate.com

Karate Classes in New Zealand Are Back!