Back From The Brink | GKR Karate

Shimbun, GKR Karate’s official club magazine, meets the miracle man who fought to return to the dojo having stood at death’s door

Back From The Brink

Back From The Brink

Shimbun, GKR Karate’s official club magazine, meets the miracle man who fought to return to the dojo having stood at death’s door.

With fewer than one percent of every 1,000 people who start out in karate going on to grade to Shodan-Ho, the statistics have always been stacked against Bill Terry becoming a black belt.

However, betting against the Brisbane-based karateka achieving his dream would be unwise, given the 52-year-old’s remarkable track record of defying the odds. Bill’s history of confounding the medical profession is particularly impressive, given doctors were convinced death was more likely than a return to the dojo for the then-3rd Kyu in 2010.

Having already been forced to hang up his gi a couple of years earlier as a consequence of coughing up blood every time he exerted himself, Bill believed he was finally on the road to recovery when he went under the surgeon’s knife to investigate the cause of his alarming symptoms.

The operation revealed that a severe infection had spread through the brown belt’s right lung and into his chest wall, causing the two to tear whenever he exercised. With cancer ruled out, part of one lung removed and the infection supposedly banished from his chest, Bill was sent home to convalesce – but soon found himself back in hospital and fighting for his life.

Unbeknownst to Bill and his family, the infection had returned with a vengeance and a coughing fit tore the pulmonary artery from his heart, resulting in massive internal bleeding.

“I remember sitting on the edge of the bed and feeling a warm gush of blood in my chest and thinking ‘something has gone wrong’, which of course turned out to be a huge understatement,” the father of three told Shimbun.

“I tried to keep myself relaxed as I knew that if I panicked, I’d be dead, whereas if I kept my heart rate slow, I would stand a better chance of surviving until an ambulance got to me. I just went into survival mode.”

Thanks to the efforts of his son, Jay, and partner, Zita, Bill was kept from slipping into unconsciousness. But the arriving paramedics struggled to find sign of a pulse and he was rushed to hospital under police escort.

With the right-hand side of his chest completely flooded with blood, the former member of the Queensland State karate squad conceded that what unfolded next was tougher on his loved ones than it was him.

“I recall passing out as I got to hospital and thinking that I’d reached my end,” he said. “It was horrible for my family because after an hour-or-so of me being in theatre they were told by the surgeon to prepare for the worst as it was highly unlikely I would make it off the operating table. The medics had already lost me a couple of times and I’d been clinically dead.”

Miraculously, 14 hours later Bill did leave theatre, but the prognosis shared with his family was still particularly bleak. Put into an induced coma, there remained doubts over whether he would wake up and concerns that, even if he did so, he could be in a vegetative state. And when he did regain consciousness it was clear that Bill still faced a long and difficult road to recovery.

“I could only remember certain people, I couldn’t speak and I had no hand-eye coordination,” he added. “I was pretty much a baby and had to learn everything all over again, including how to walk. I went into hospital weighing 105kg and relatively fit and came out three months later weighing just 52kg – I was a skeleton with a skin covering.”

Although physically unable to look after himself for the best part of four years, Bill’s thoughts often returned to karate. He decided to use the pain of missing out on his martial art as a means of motivation. 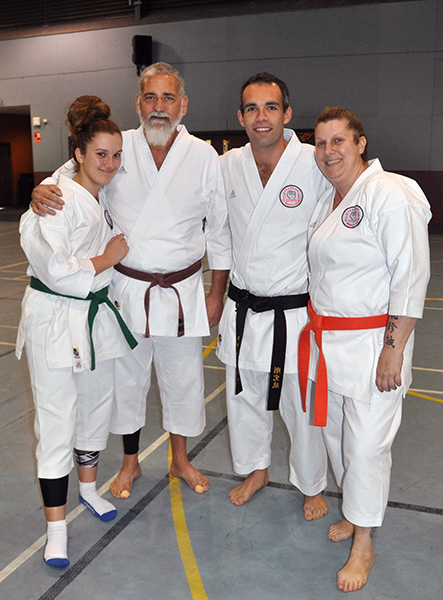 “My health was my prime concern but there was not a day that went by that I didn’t wish I was back in class,” he explained. “I really, really missed karate and the people who I trained with.

“When I reached 3rd Kyu, and not realising I would end up sick, I’d bought an embroidered black belt to give me something to focus on through the stages of brown belt. Three years into my recovery I remembered I had that belt and, although it sounds corny, I put it where I could see it every day.

“If you have nothing to focus on then nothing will happen and you will stagnate. I figured I’d never be going back to karate but I had to imagine that one day I might so I could aim my recovery towards it. Whether or not I fell short didn’t matter, I just had something to aim for.”

Seven years after putting one foot over the threshold of death’s door and with his health and strength returning, the prospect of pulling on a gi again became increasingly difficult for Bill to dismiss. Indeed, as soon as he was able to cast aside his walking stick, his mind was made up and he returned to train alongside old friends within Region 10 despite only having one fully functioning lung and a “leaky” heart valve.

“It was scary,” he added. “I consider myself a ‘pusher’ and like to see how far I can go, so decided to go back as a brown belt and sink or swim.

“It wasn’t easy – I thought I’d been through some tough times but returning as a 3rd Kyu and expecting my body to be able to do what it could before brought a new definition to pain. The first few months really hurt.”

Against his own expectations, Bill has continued to hone his karate. Thanks to the endeavours of Sensei Rowan Cassidy, Alex Plummer, Josh Nixon, Matt Plummer, Reagan Crowther, Nikki Arthur and Kelvin Trembath – he can once again contemplate the day he is able to tie his long-ago purchased black belt around his waist. Predictably for a man who refuses to be beaten, the 1st Kyu insists that grading to Shodan-Ho will not be the final chapter of his GKR Karate story.

“Far from it,” he said. “I am absolutely loving my karate, the people, and getting to train alongside my daughter Patience and partner Zita. It’s brilliant – we love our instructors and fellow students. I keep telling people that GKR Karate is less of a club and more of a family. You are not just a class of strangers. We have a ritual after training on a Wednesday night that most of the class will go to Hungry Jack’s and spend another couple of hours together having a gasbag, talking like idiots and having fun.”

Such simple pleasures are something Bill rightly savours.

“Even now waking up of a morning is not a guarantee, so I make sure I enjoy whatever I’m doing,” he said. “Some people may look at me and think that I don’t appear to be having much fun as I tend to be a bit reserved, but trust me, I am enjoying life to the absolute max on the inside because I don’t know if I’ll get to do things again.”

And Bill’s lust for life and determination to grade to black belt have the full blessing of his wife.

“We’ve been given a second chance and not everyone gets that,” she concluded. “We could either sit back at home and feel sorry for ourselves or grab the bull by the horns and see what happens. And that’s what we’re doing.”

This article originally appeared in Issue 2 of Shimbun Magazine. Got some catching up to do?

For individual back copies or for details on how to subscribe, email shimbun@gkrkarate.com