You're Good...For a Girl | GKR Karate

This article is dedicated to females who live under the term “you’re good...for a girl”, and aims to bring home truths to others who may think it 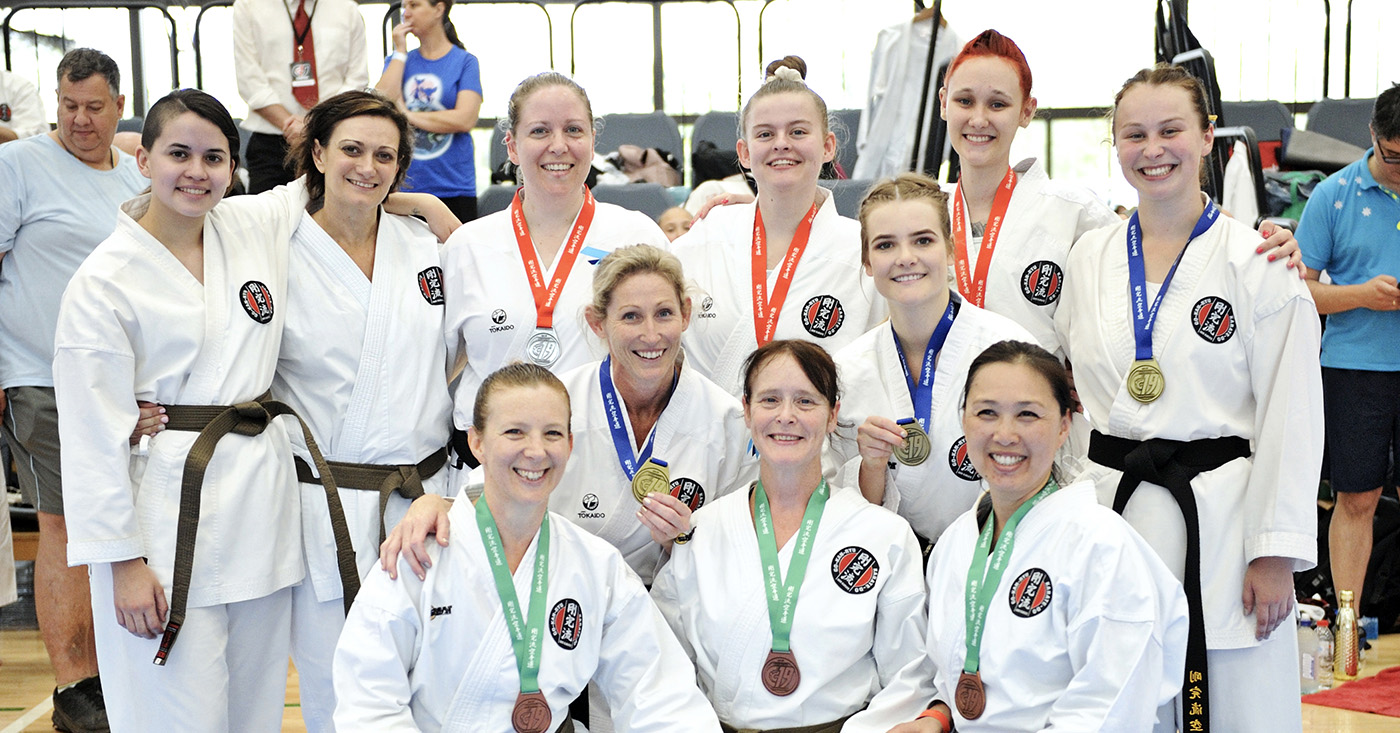 This article was inspired by a conversation I had with one of my female karate students. She trains with a commitment to excellence that is unparalleled and through this, lifts all those around her. She made the comment, “I aim to be seen as a good martial artist, not just a good female martial artist”.  My response was simply “you already are”.

It left me deep in thought long after the conversation had ended. How many other female students feel this way and how many male students have thought “you’re good…for a girl”?

Certainly, it exists in the world of sports with even professional female soccer players, basketballers, surfers etc, living under the banner, not as athletes but as female athletes. But karate is very different from most sports, and so I was prompted to ask myself, do men have the right to think this way in terms of karate?

What Makes a Good Karate-ka?

If we judge a good karate-ka on strength and appearance of power then perhaps they do have such a right. There is no denying that men are physically stronger and faster (on average) than their female karate counterparts. In fact, where a man and woman weigh the same, the man will generally have twice the strength than the woman. Furthermore, many people gauge martial arts prowess on kumite ability and when it comes to kumite, most men take to it like a duck to water, while many female karate-ka are a little hesitant at first.

So if we fall into the trap of gauging karate ability purely on strength and rough-and-tumble style sparring then it can appear women have a big disadvantage when it comes to progressing as a martial artist. No doubt in these departments, men with their larger frames and more aggressive natures will outdo you here. But being born a man does not mean you will make a better martial artist than a woman, just as being born Australian does not mean you will be a good cricketer (I have friends that are testament to this.) The truth is, these traits make up only a small portion of what karate training is all about and as you will discover below, there are indeed times when women have the advantage.

In dealing with hostile situations, a woman will rarely think of physical confrontation to resolve the issue. Her inherent desire will be to solve it to a mutual satisfaction. This is partly because a woman’s ego does not put a priority on being “tough”. Men are far quicker to lose their temper and violence will be one of the first things that come to mind. Yet karate teaches people to harness their aggression and control their ego – just observe any good black belt. Female karate practitioners will generally find the ‘way of’ (do) karate easier than their male counterparts. This becomes very obvious when viewing sparring. When a man is accidentally hits you can often see him thinking, “Now I am going to get you back” rather than accepting it as an accident.

Put In My Place

Men carry most of their strength in their upper bodies and therefore over-rely on this area. For evidence of this, just witness any man’s technique in picking up a heavy box or holding a baby. When it comes to rock climbing a man will scale a wall with ease using his upper body. After the first climb, however, he will be completely worn out and unable to continue climbing. Women generally take to rock climbing a little quicker than men because it requires the use of the whole body. Women will naturally veer towards the correct technique and climb for extended periods.

My sister Therese is older and definitely weaker than I am yet she has scaled most of the top peaks in Europe. Now I consider myself a pretty good climber but one sunny afternoon while we were scaling a peak in the Blue Mountains, despite the fact that I had a 30-minute head start on her, she passed me on the rock. She stopped briefly, smiled and said, “you’re pretty good…for a guy”.

Sadly, through sheer exhaustion, no snappy retort was forthcoming. Karate and rock climbing a very similar in the fact that power must be generated through the entire body. Men generally try to generate all their power from the shoulders – which is, of course, incorrect technique. Female students on the other hand with muscular strength will pay closer attention to the details of the technique resulting in faster progression.

Too Tense Vs Too Soft

In many cases, men are too tense in their techniques. This leads to a lack of power and combined with the already over-focus on the shoulders, poorer technique. This shows up in all areas of their training. Women alternatively, having to carry less bulk and muscularity do not have to work against this during training. Combine this with her already acute focus towards correct technique, and her ability to learn new techniques is sped up enormously. On the downside, female karate-ka are more likely to be too relaxed or soft in their application, often with too much focus on technique and not enough on intent.

So here lie the two biggest differences in male and female martial artists (at least among beginners). One being too tense and the other too relaxed. Well, we did know that men were from Mars and women were from Venus right? Neither is correct in this situation, as both are half rights. A technique to have full power must be relaxed through the motion (giving the advantage to Venetians) but must finish with the tensing of the body (thus giving the advantage to the Martians). That said, however, I have usually found it easier over the years to teach women to add tension and spirit to the end of their technique that I have to teach men to lose their tension at the beginning of their technique.

It’s All In The Hips

It’s a funny thing about life. We always want what we can’t have. Women are forever complaining about their hips outside the dojo and men always complaining about their hips inside the dojo. Women generally have better strength and flexibility around their hips. This makes it easier to perform stances and kicks. Coupled with the fact that they aren’t ‘trying’ to be strong, they develop a better mind-body connection. This is also evident when watching Kata, as female karate-ka tend to have more finesse and cleaner technique.

On a trip to Japan, a master speculated that I had a strong punch. At first, I thought it to be a compliment…I was wrong. He went on to show me that my power was derived too much from physical strength, as I wasn’t using my body to create weight transference. He reminded me that while it is OK now, one day age would catch up to me and I would no longer be able to rely on brawn. When this time came it would be best if I knew how to use my whole body properly if I wished to be effective. Mind you, this man was a frail build and seventy years plus yet demonstrated his point by hitting me harder than anyone I can remember.

The point also hit deep because I was an instructor and as such, my students learned by watching me. Not all of my students are grown men; many are of course women and children and therefore I have a responsibility to them to ensure my punches were technique (not strength) related. This is a trap many men can fall into. Remember, brawn does not last forever. It is also a potential reason why women can make better instructors than men.

Sparring Is NOT The Equal Equivalent Of Self-defence

Men, in general, are better than a woman in sparring. But that’s OK. Men are usually more competitive and confident to run in behind their solid frames. Most men are accepting of the fact that they may be picked off on their way in to attack – especially if they intend to give three or four back. Yet while sparring helps train a person for a real life confrontation, it is by no means the equal equivalent. In a real situation, a person should not be ready to accept a punch on their way in because it might just stop them in their tracks. Studies have shown that despite men being stronger sparrers, in self-defense situations, women are more cunning.

A male martial artist will often think firstly of his sparring techniques to defend himself (e.g. legal punches and kicks but with full-contact) while a female karate-ka will think of her basic techniques (e.g. groin kicks, knees etc). It is for this reason, that women should not be too concerned if their sparring ability is lacking. In an artificial confrontational environment (sparring) she may find it hard to get aggressive. But should the time come, she will find it in abundance? Just look at nature when a mother is protecting her young. Of course, many women have no problem finding aggression in sparring.

Women can succeed in karate, just as they have in the business world. Of the number of people who join martial arts, the percentage of women who attain black belt is much higher than that of men. The woman’s less muscular body and less aggressive nature can indeed work to her advantage. A woman’s mental persistence will enable her to sooner perfect her basics and kata.

In kata, her fighting spirit can be developed against an ‘imaginary’ opponent. And if she relates kumite with self-defense with the goal of one effective technique (rather than brawling) she can develop her timing, speed, and distance.

So the phrase “You’re good…for a girl” may be relevant on some occasions. But should you think to actually speak it, perhaps next time you see a male student with clean, accurate technique in their Kihon, kata or kumite, you might just say “hey, you’re good…for a guy”.

So this article is dedicated to all those girls who have been living under the term “you’re good…for a girl”, yet simultaneously it aims to bring home some truths to all those men who may think it – and I must admit, at times I am one of them.

The Battle Of Fatigue